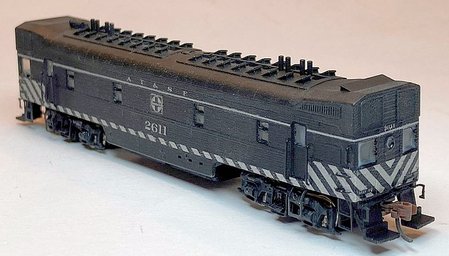 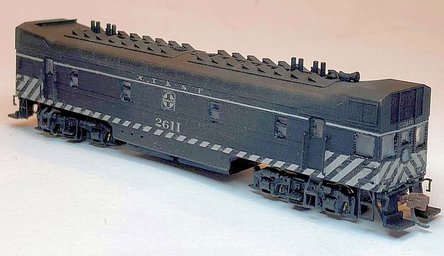 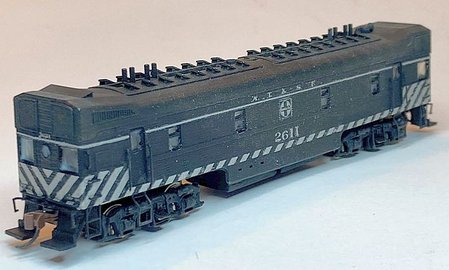 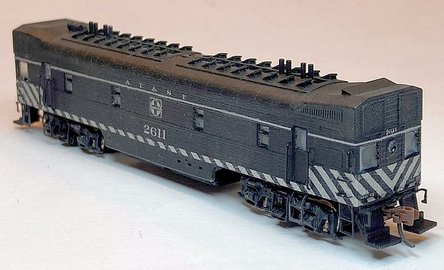 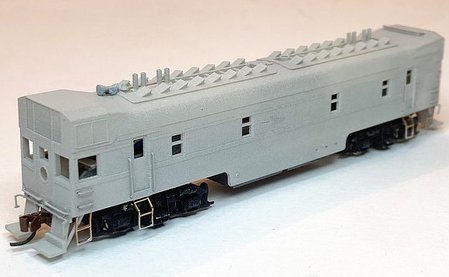 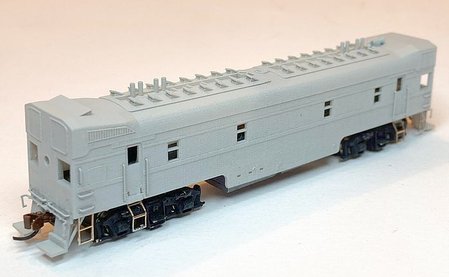 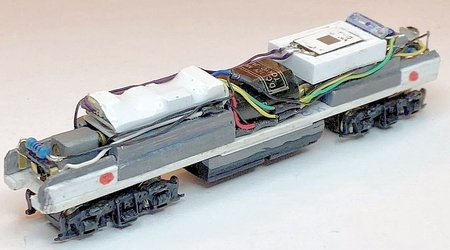 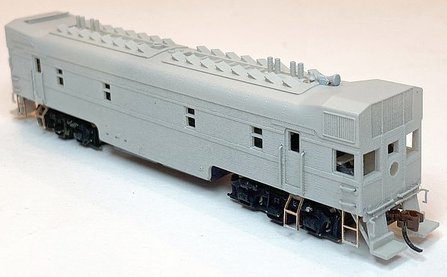 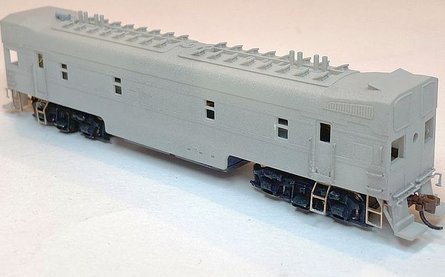 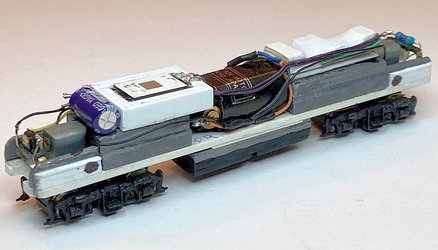 In 1934 the Santa Fe ordered their first two passenger diesels from Electro Motive Corporation: the Twin Spots or Amos and Andy, powered by two 900 HP Winton 201A engines each. They were delivered in August 1935 and were intended for the then heavywheight Super Chief.

There were numerous (smaller) changes to the looks during the first years, skirting partially removed, extra cooling equipment on the roof, different paint schemes.

In 1937 the engines pulled the then new lightwheight Super Chief.

In 1938 the were rebuilt into the 1 Spot and 10 Spot, with 1 raised - bulldog nose - cab each, better cooling systems and painted in warbonnet style. Also the lead truck was changed to 6-wheel, with the lead axle unpowered.

In 1941 the 10 Spot was converted to booster 1A by removing the raised bulldog nose cab.

In 1948 this 1A booster was converted to transfer/road switcher 2611, riding on 2 EMD FT trucks. It was first used in the Los Angeles area but later transferred to the Eastern Lines.

Both units were returned to EMD in 1953. They were rebuilt into two EMD E8m engines, numbers 83A and 84A.

There are 2 different possibilties to build/make a frame for 2611.

First you have KIT 446 (see above): I have a limited supply of DRIVE TRAINS from Samhongsa FT models. They have the correct friction bearing EMD Bloomberg trucks with all metal worm gears (no chance of cracking like the plastic ones sometimes do). Perfect slow speed control and hardly any noise at scale speeds. All wheel current pickup with improved wipers (on insulated wheels only, other side goes through metal truck frame). The model pictured above, wheighing almost 6 ounces, pulled a 60 car reefer train around my layout (0,5 % grade max).

This frame is set up for DC,  with LED's/resistors for head and rear ligths.There is more than enough room to add (lead) wheight and, if you want DCC, enough room for a decoder (of your choice) with or without sugar cube speaker/sound. I was able to create a total engine wheight of almost 6 ounces...... a lot more than the already heavy Kato E8/9 as comparison. See pictures above for this setup.

Second you can take just about any plastic narrow hood EMD model (Geeps are perfect) with Bloomberg trucks if you overlook the fact all these models have roller bearing tucks...... only close up view will reveal that. The frame has to be cut (normal metal handsaw with frame in a vise) on one side between motor and gear tower. If you flatten (metal file with frame in a vise)the side of the metal frame first you can just CA glue some spare/scrap 0,5 or 1 mm metal strip along both sides of remaining frame and geartower.

The trucks centers should be 73 mm apart. The only extra job is lengthening one drive axle a couple of mm. Take some 1,5 mm inside diameter metal tube to CA glue a sleeve on one gear tower worm wheel, insert some 1,5 mm steel rod and cut to length (with a Dremel grinding disk). Re attach the black plastic block to connect with the flywheel. Be sure there remains some "play" in the reassembled drive train. If the lengthened shaft shows a slight wobble you can bend (carefully) the metal sleeve a bit to re-align the shaft.

to be finished soon