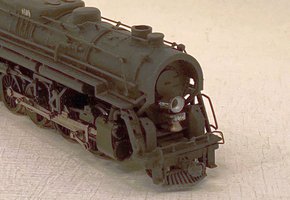 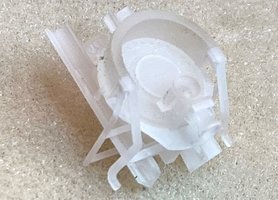 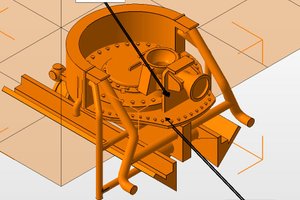 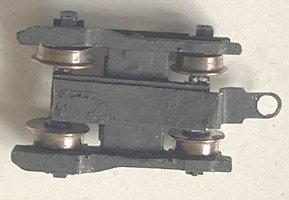 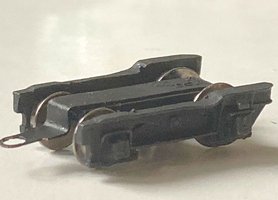 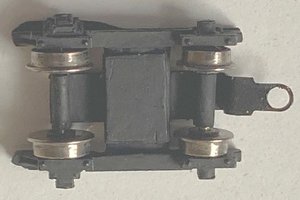 This kit/print is only available directly through this site. Shapeways printed in FINE DETAIL PLASTIC/SMOOTHEST.

Due to the fragile/small piping I can only order this print myself in the PRINTED ANYWAY VERSION, which is unfortunately not available to other buyers, only to the designer (my risk if the print comes out OK, which it did until now). If I have to adjust the drawing to the Shapeways recommended specs, some piping/parts would be thicker (out of proportion) than desired.

These Berkshires were build by Lima Locomotive Works for the Boston & Maine, class T-1.

At the end of WW2 the Boston & Maine received new EMD FT's, making the Berkshires redundant.

The ATSF was still power short so they bought 7 Berkshires. The Southern Pacific also bought 10 engines.

They arrived on the property in August 1945. Then the war ended...... and traffic declined swift and sharply, making the new engines almost redundant (again). Only 1 engine, 4197, was rebuild to Santa Fe standards: new standard ATSF cab, Elesco feedwater heater on top front boiler, new pilot and some more..... That one was some service and was sold for scrap in 1954. The other 6 saw little service (as far as I know) and were sold for scrap in 1949. Some tenders even kept the B&M striping......

I made this conversion because the Bachmann Berkshire is a fine running and good pulling model, and the Cofiin feedwater heater and associated piping are very distinct features...... some will find it ugly but it sure stands out.......

The original tender is OK except for the trucks and tool boxes have to be added.

You will have to fabricate new bearing plates for the trucks from 1 mm styrene pieces (glue AAC). The electrical connection wires go up through the holes in te tender floor and are hard soldered to the decoder (leave some slack for easy movement).

The original engine needs some changes......

Remove the boiler front and the plastic cab.

Using your Dremel grind away the box (feedwater heater) in front of the smoke stack and the box on top of the firebox just in front of the cab roof (valve controles). I used a grinding disk for the rough work and milling and sanding bits to clean up to a nice smooth contour.

When I visit my dentist I always ask him for his old/worn bits (he sterilizes them for me before). These are still very sharp and useful for model work.

At the cab end you might go through the metal shell but this can be repaired with some body putty and careful milling/sanding afterwards.

The shell will be painted back anyway and some small telltales will go (almost) unnoticed.

On the cab the window needs to be moved a little backwards, as far as I can determine from ATSF engine pictures: I filled the forward part with some scrap styrene and removed a liitle bit from the back end with small jewelers files.

Now for the engine shell itself.

The new Coffin feedwater heater should be a drop in..... just a little cleaning of the front opening should be enough. Be careful with the protruding connecting pipes..... they are fragile. Paint the backside of the print thick pitch black to avoid light shining through. I still have to insert a 1 1.5 mm tound lightbar into the headlight to connect with the LED front lightsource. Next I fabricated extra piping along both boiler sides from 0.64 mm styrene rod (Evergreen) and 0.375 mm brass wire. For location see pictures above and prototype pictures on the internet.

I also made a large/long air resevoir under the left side running board from 2 mm styrene rod.

On top of the boiler/firebox just in front of the cab a new generator (Models by Eric I believe).

Next I glued in place (ACC) the small turret just in front of the smoke stack. The location of the small hole in the side (to accept the actuating rod) should be on the right side. The actuating rod is made of 0.3 mm steel wire (brass is too flexible/soft). The hardest part is drilling some holes for the stanchions. Drill 2 0,5 mm holes inti the sandbox. The rod is divided into 2 pieces (in front of and behind the sandbox).

Also in the 3D print are 2 "ash pan extensions". Check the prototype pictures for these distinct parts. The prints can be glued (ACC) on/under the edge of the metal firebox and will not interfere with the trailing truck lateral movement.

The trailing truck needs to be modified/changed as well, using the wheelsets from the original trailing truck. I adepted John LeMerise's Keystone Details Lima trailing truck. Please see/check the pictures above. Remove all extra details (unfortunately) from the Keystone model as per picture and file the bolster flat on both sides. Glue a small strip of 1 mm styrene on top of the bolster. Cut 2 pieces of 1.6 mm inside brass tube and remove all burrs carefully. Glue a small piece of 0,5 mm styrene under the front/small wheel end of the truck. Remove 1 wheel from each axle, insert through brass tube and replace/regauge the wheel. Glue the 2 brass tubes (ACC) under the styrene strip. Shape a small 0.25 mm brass strip as per picture and drill a hole. A small rectangular piece of 1 mm lead sheet is glued under the bolster for better tracking.

I also replaced the underside of the front coupler/pilot deck with a spare Atlas dummy front coupler I still had in my parts bin (origin/loco unknown). Advantage: more conform prototype, lower to the rails, scale dummy coupler (I do not like a operating/large coupler on the front end of steam engines if they are powerful enough).

Next I "blasted" the whole engine shell with my Air Eraser using alu grit. That leaves and nnice clean surface with a little "tooth" to hold the Mr Surfacer Primer 1000 (a little diluted) much better. Black airbrush painting, decalling and dull coating completes the job.